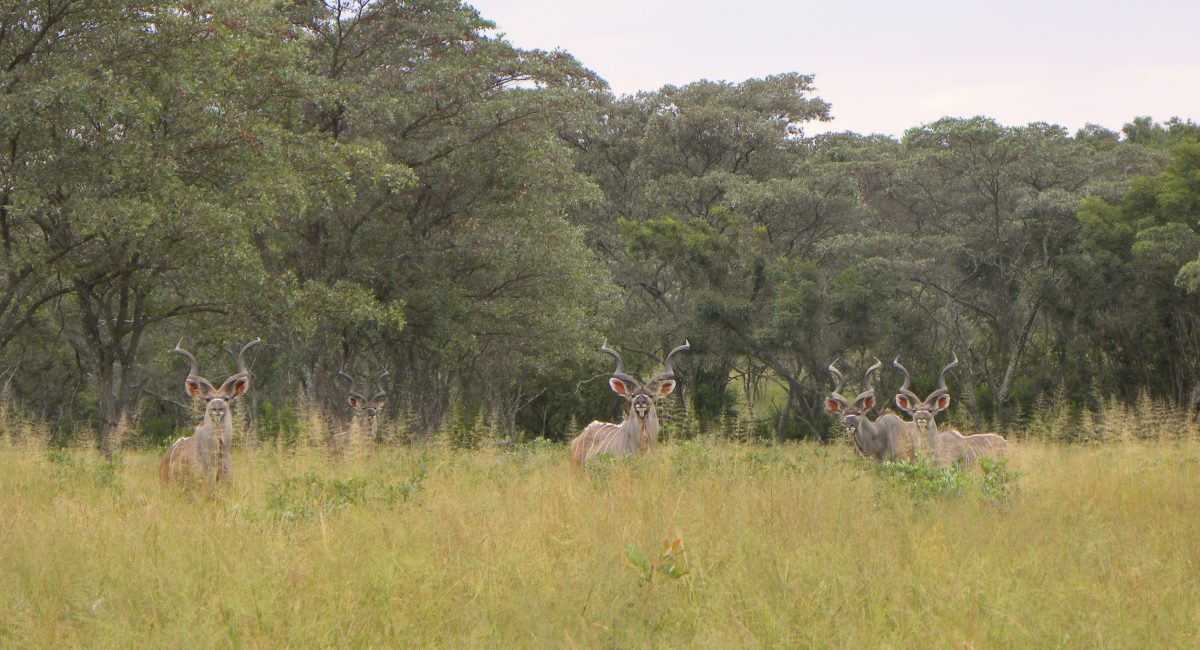 Hunting a trophy Kudu is on every hunter’s bucket list. Here is some info for those hunters coming to Africa to hunt a trophy Kudu.

The “grey ghost” is the name given to Trophy Kudu bulls by hunters. One of the most sought after and spectacular animals of Africa. A very graceful animal with beautiful long corkscrew-like horns, a white chevron between the eyes, large ears and a beautiful long beard running down the front of his neck.

Trophy Kudu bulls are most active early morning and late afternoon, resting in the shade during the heat of the day. They are shy animals that like to hide in the shades of a bush standing motionless for a long time when suspicious. They can disappear without a sound and with very little movement, hence their name the “grey ghost”. 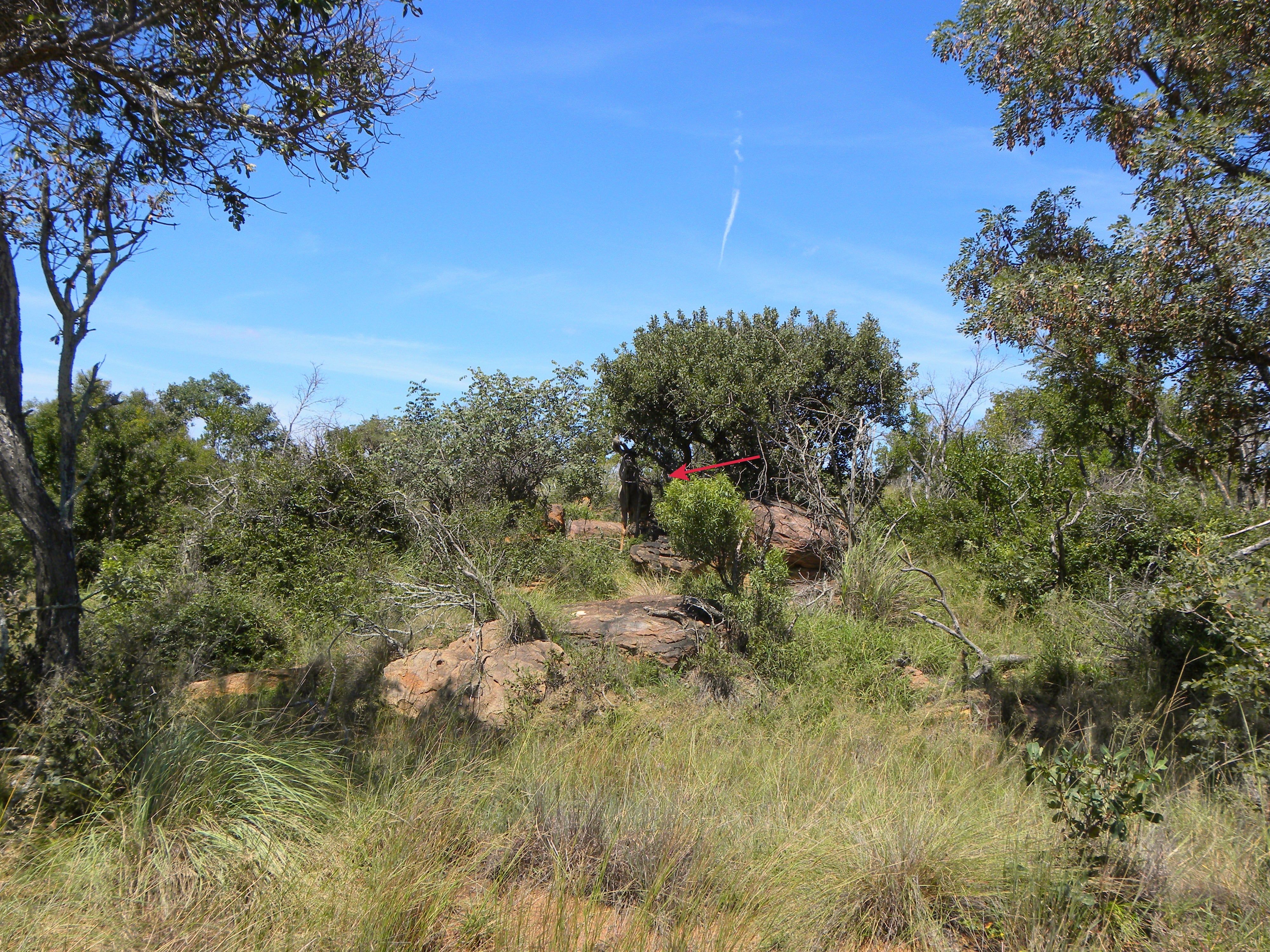 Their senses are exceptional, with those big ears they don’t miss a sound, and many a time you will hear the loud bark of a kudu long before you have spotted it. Bulls will join female herds during mating, but favor other habitats out of the mating season.

The best time of the year to hunt for Trophy Kudu:

There are three ways of hunting kudu.

The most common way to hunt trophy Kudu here in the Waterberg region of Limpopo, is to slowly and as silently as possible walk the area they prefer most in the early mornings or late afternoons when they are most active. Stop regularly to listen and glass the area. Look into thick dense bushy areas and shrubs, they tend to stand dead still in these bushes. Look for movement or a horn tip shining in the sun.  If you can spot them first you have a good chance of shooting one. 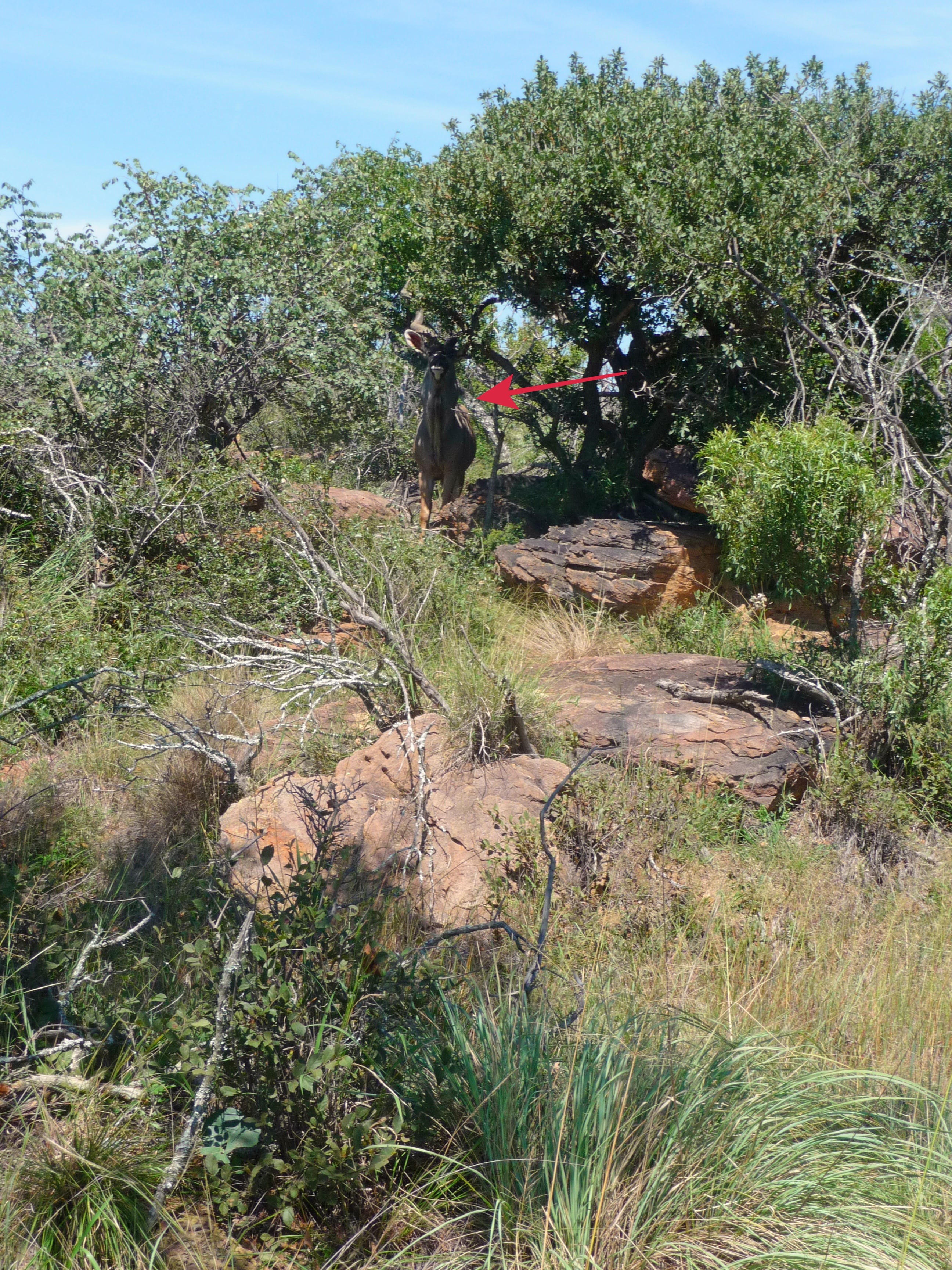 Your second option: Find a high vantage point and glass the area in the same manner as described above. Look for the swish of a tail, the slightest movement of an ear or a horn that is protruding above a bush. Then if conditions allow you, you can take a shot or you will have to stalk closer within range. 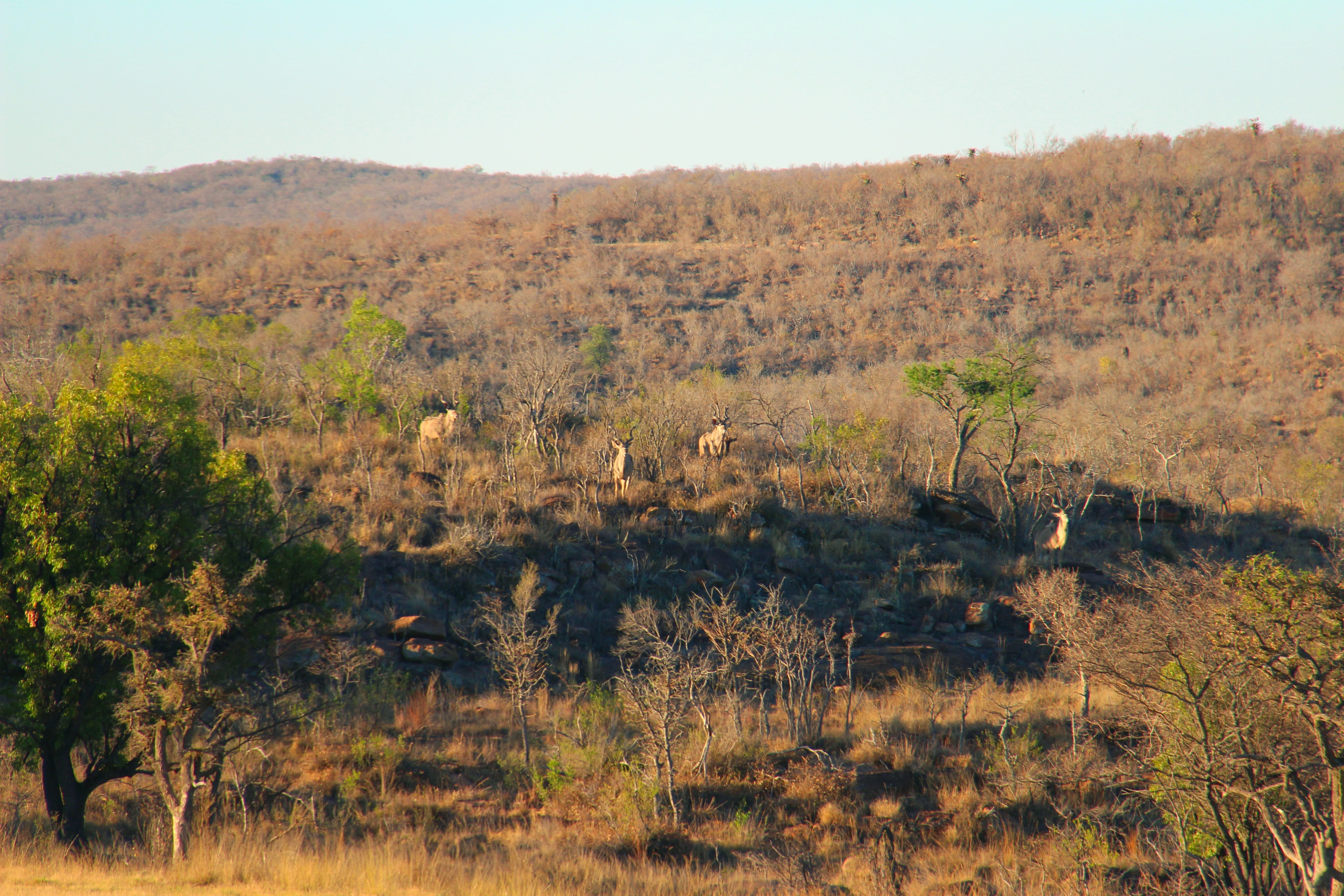 Your third option: Hunting from a blind overlooking water. This is the preferred method for bow hunting. Keep in mind that kudus have satellite dishes for ears, the slightest unfamiliar sound and they are gone. Large trophy Kudu bulls get large by not being stupid; when in a group they will always let the younger bulls or females approach the water first and only when they are sure that it is safe will they make their appearance. Almost unnoticed will they be there as if out of the blue. The key when using this method of hunting for kudu is silence. Make sure that your equipment is silent and your bow does not make any unnatural sounds when drawing it back. 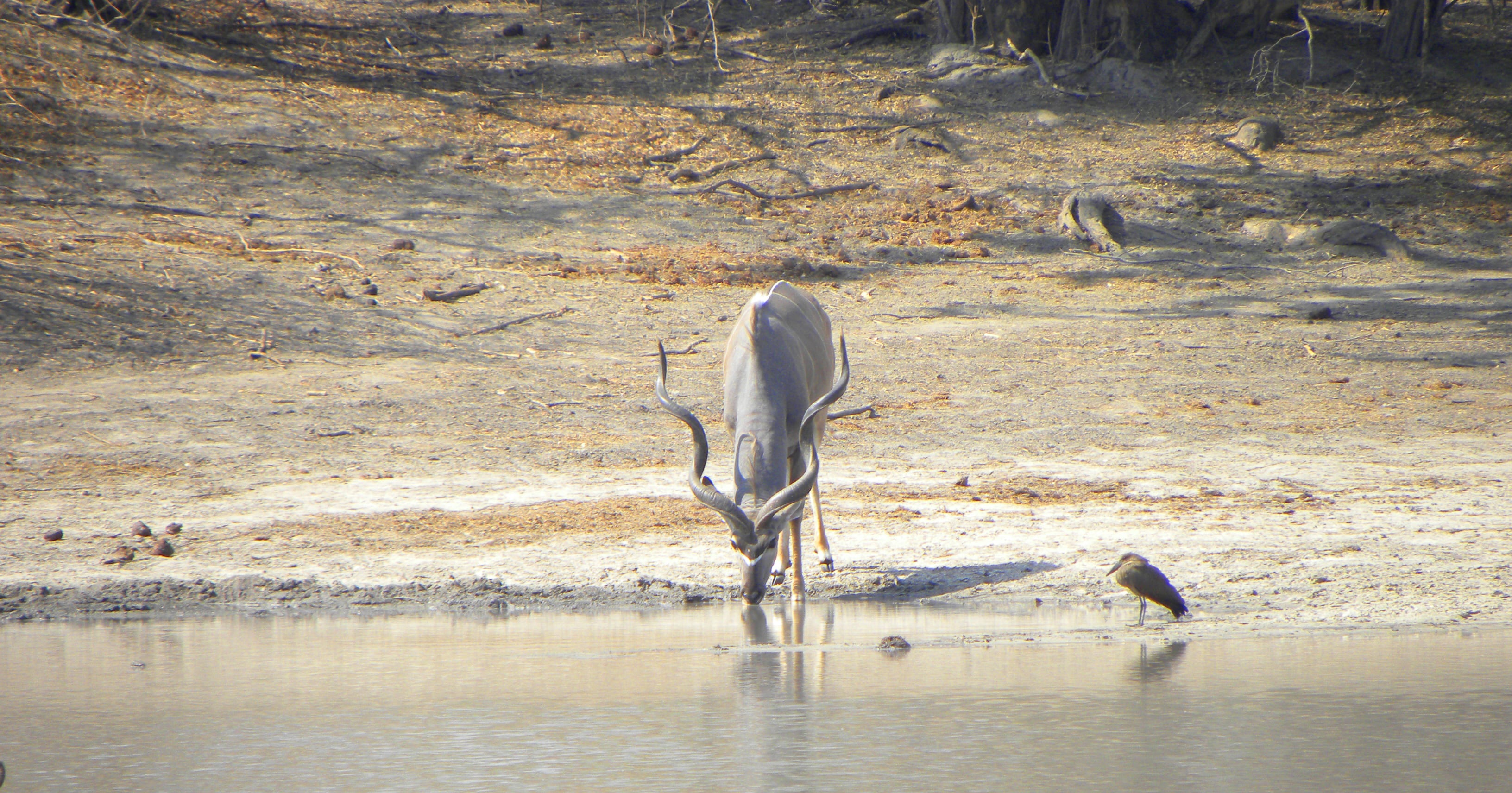 The right caliber to use for kudu?

Any .30 caliber will do the job. One aspect that we prefer you adhere to is the ammunition you bring along. We recommend a strongly constructed 220gr bullet for the .300 Win mag or the .300 short mag for kudu in the bushveld of Limpopo, where we do most of our kudu hunting at relatively short distances ranging from 80 to 150 yards. A 308 or 30-06 will work the best with 180gr bullets for the 308 and 200gr for the 30-06. Make use of only the best premium grade ammunition that your rifle shoots. We recommend the following: Barnes TSX or TTSX, Woodleigh, Federal premium and Nosler partitions. The key here is to see which of these brands work best with your rifle for accuracy.

The minimum draw weight we recommend for kudu is 60lb with at least a 500gr total weight arrow.  We recommend 2 blades fixed blade broadheads, African animals are tough and why take a chance on bad penetration if you hit bone?

The average shooting distance from the blind will range between 20 and 30 yards.

As with all African species, shot placement is vital when hunting for a trophy kudu.

On a broadside shot take aim a third way up the body in line with the front leg. This will be a heart shot. If you hit a little bit higher you will take out the lungs. 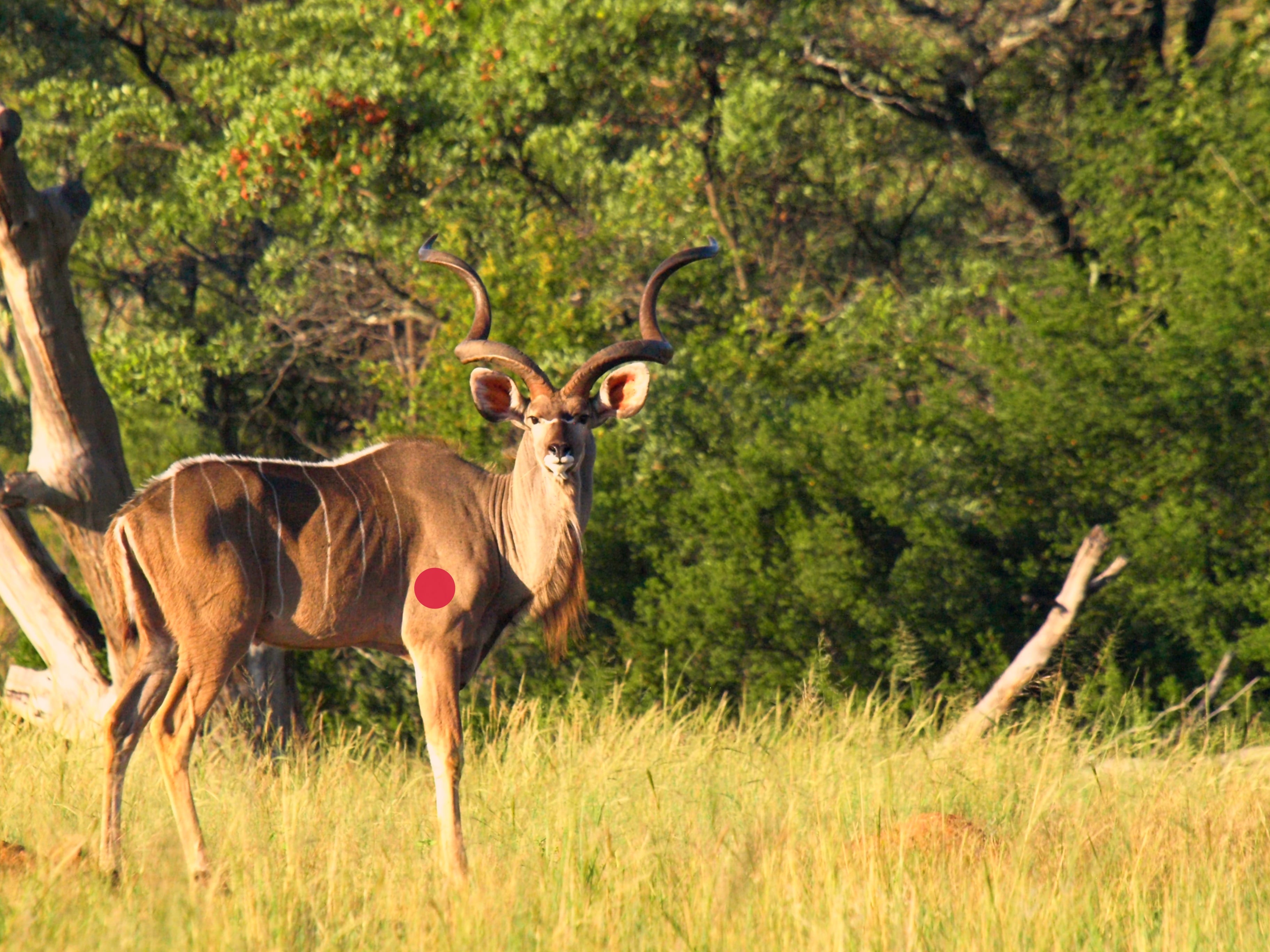 On a quartering to shot, aim for the front of the shoulder also a third up from the bottom of the body. 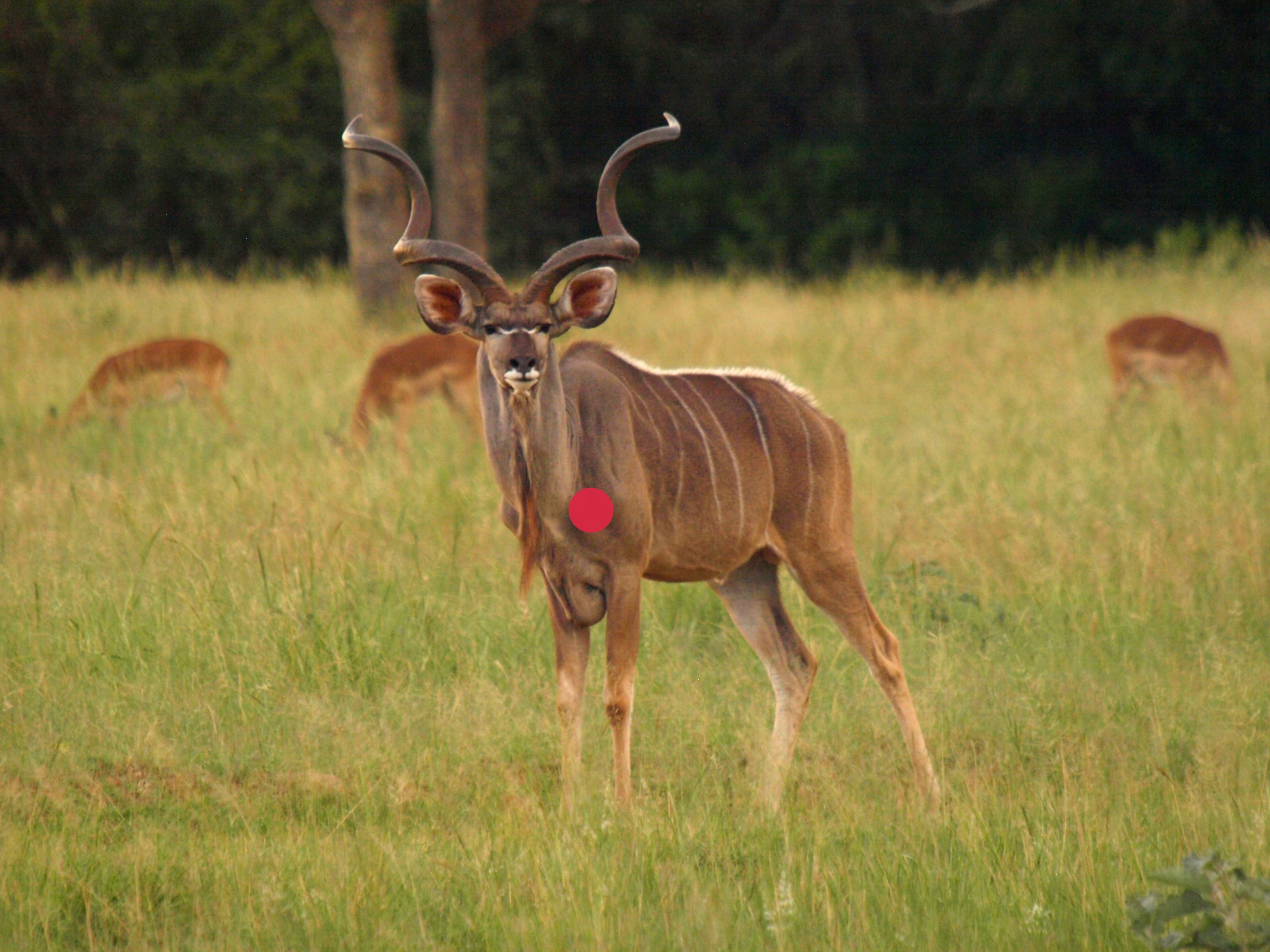 On a quartering away shot your shot placement will still be at the same height as with the broadside shot but the shot must be placed in the middle of the two front legs. 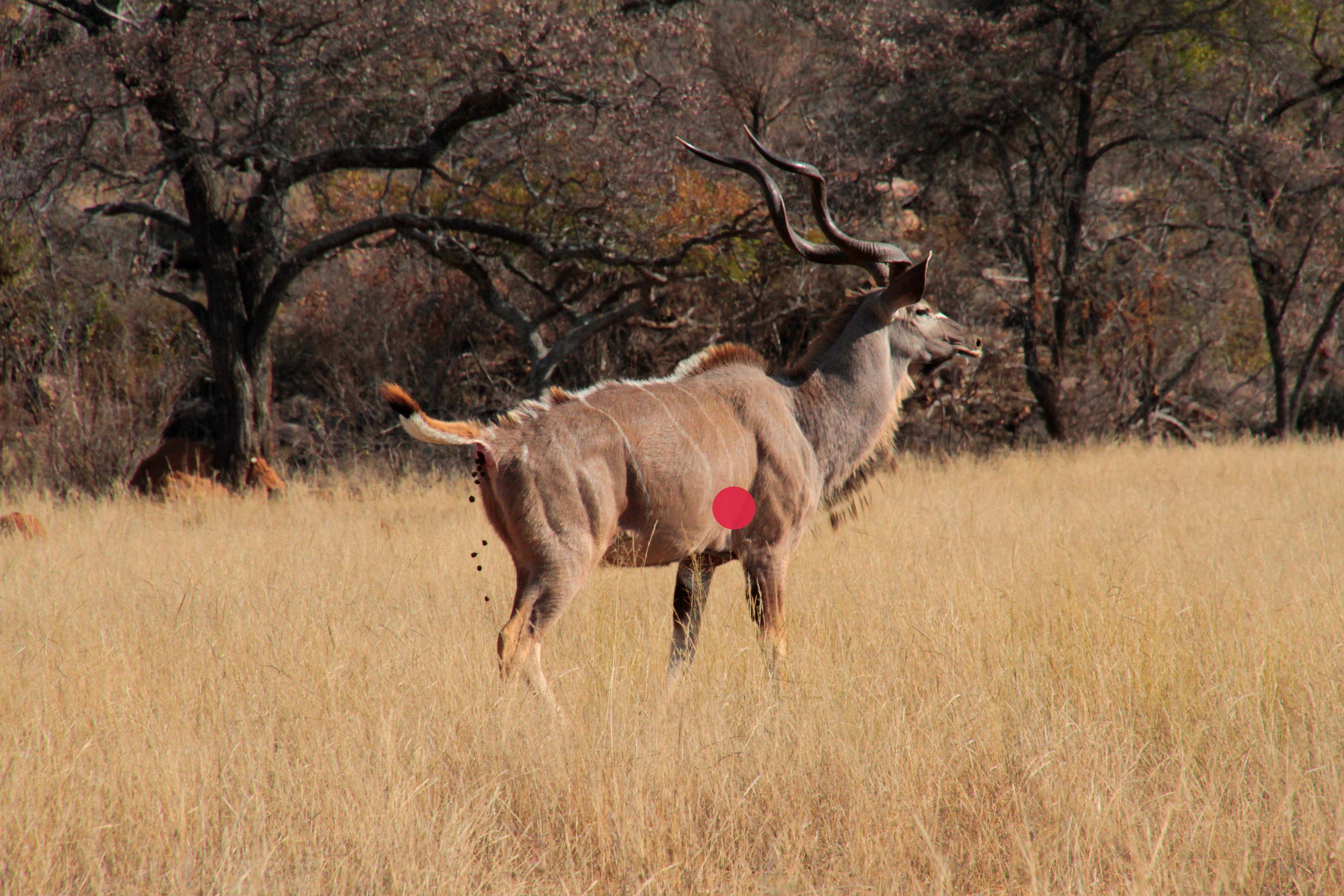 On a frontal shot aim for the middle of the chest where the neck joins the chest. 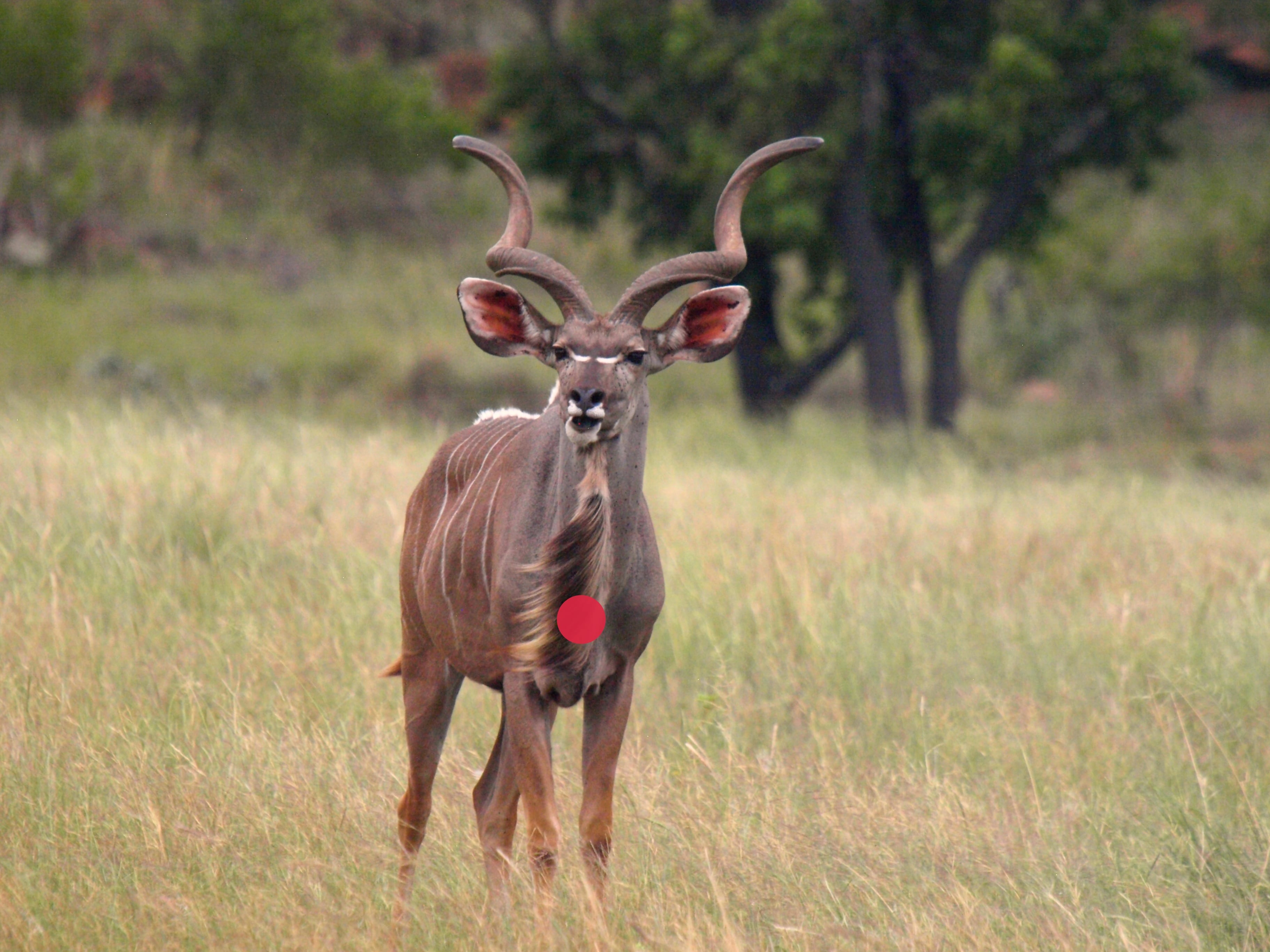 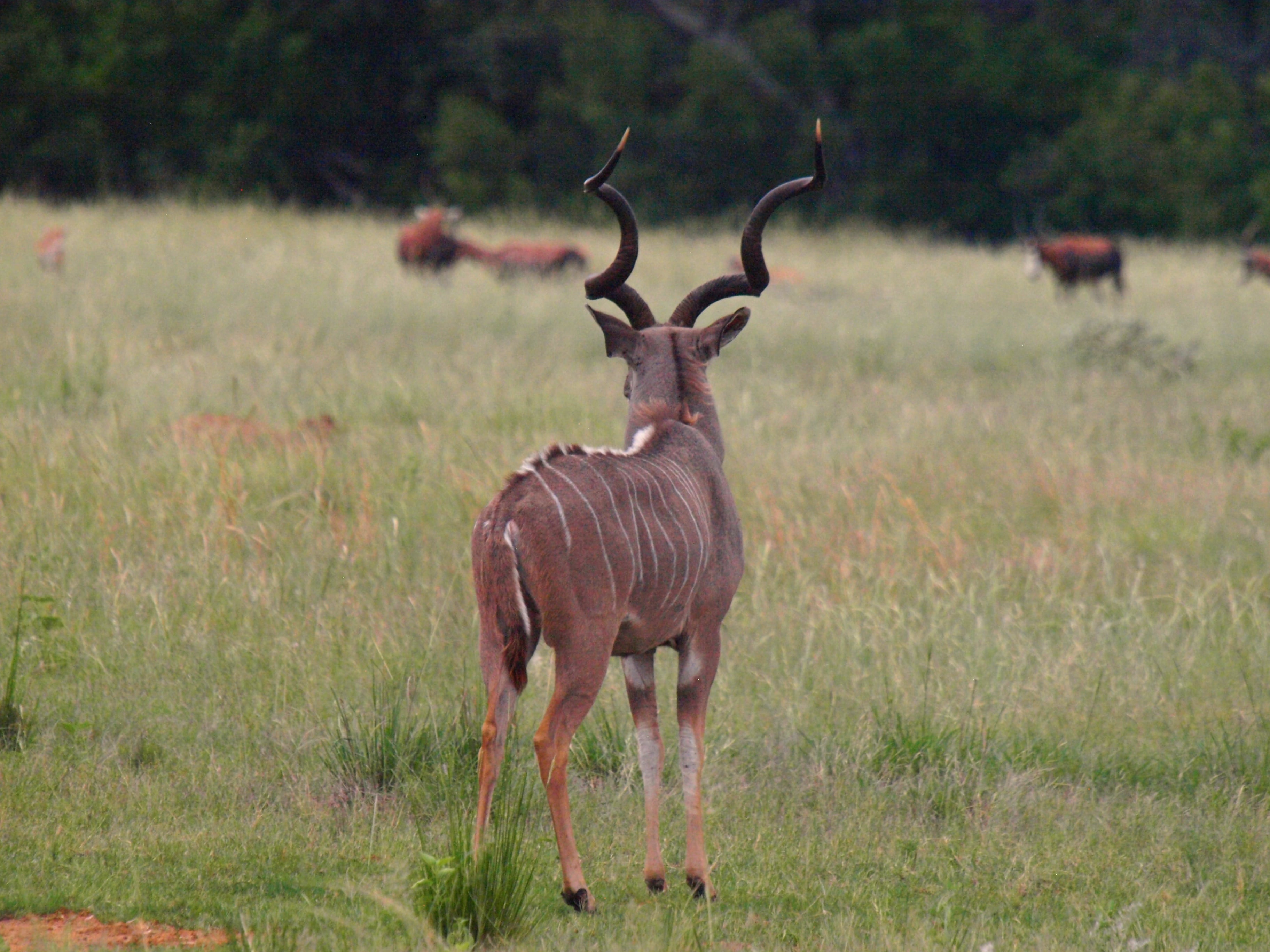 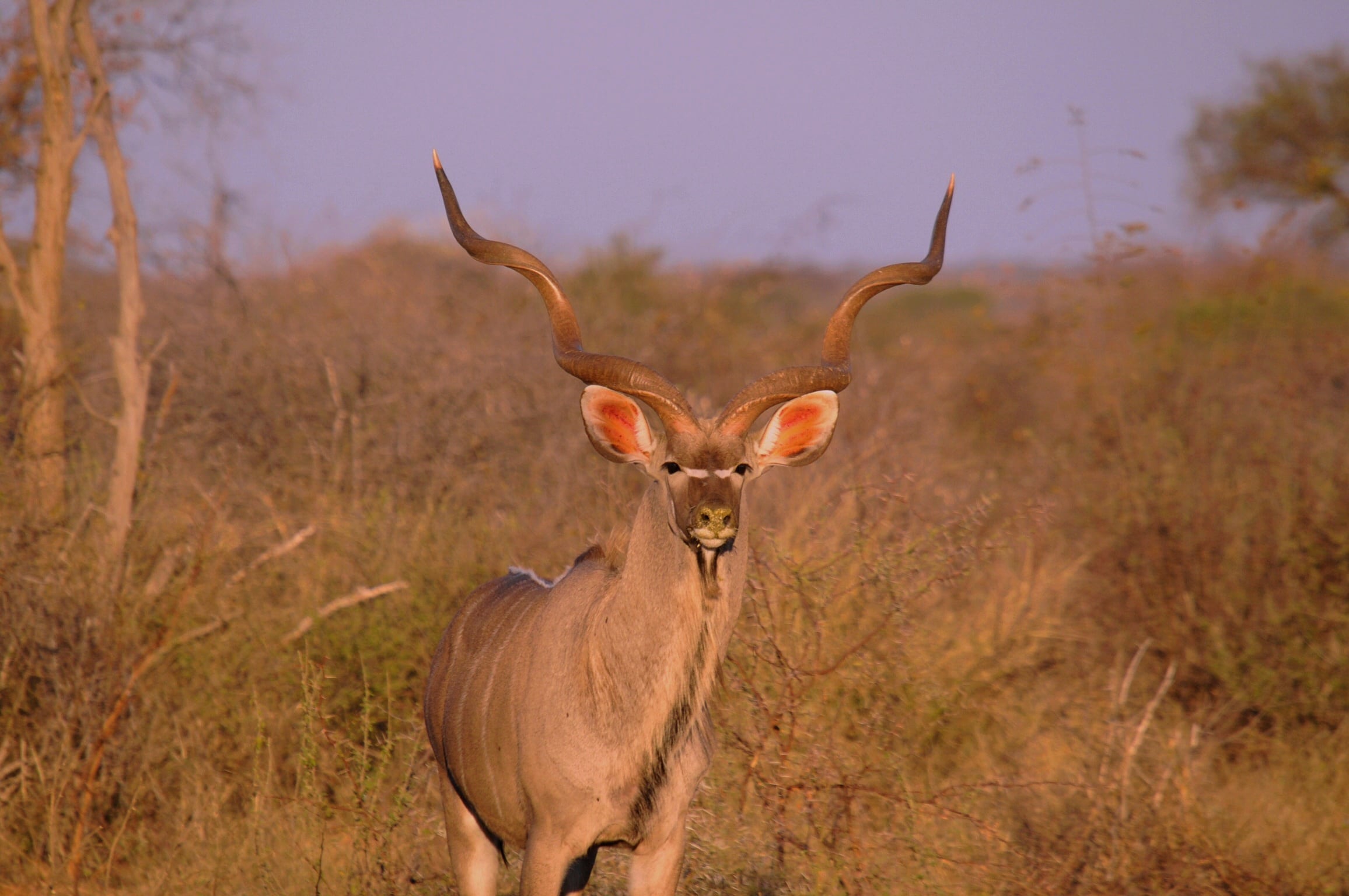 Hunting trophy kudu is more than just the trophy, the hours on foot walking through their preferred habitat, listening and glassing for movement in every bush and shadow to see him before he sees you or sitting on vantage points glassing for a big bull moving from one shadow to the next, to stalk till you are within shooting range only to be busted with a loud bark is what makes for a nice trophy. The hunt, the story, that is what makes a kudu trophy special. 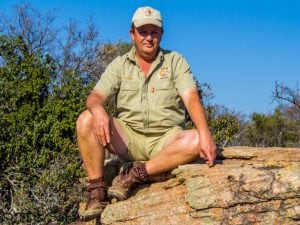 Born and raised in South Africa, I have had the opportunity and privilege to hunt and guide all over Southern Africa. 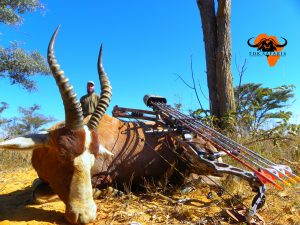 Bow Hunt South Africa, the do’s and don’ts before you go. If you are an avid bow hunter and are looking to bow hunt in 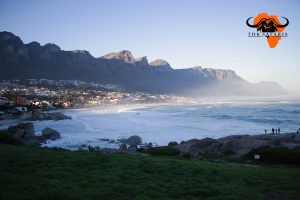 Why Should You Do A Customized Private Tour To Cape Town? Why should you visit Cape Town and do a customized private tour with TDK, what 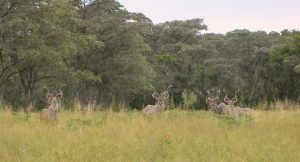 Hunting Trophy Kudu. Hunting a trophy Kudu is on every hunter’s bucket list. Here is some info for those hunters coming to Africa to hunt

Film the safari? What’s the hype?

THE OUTFITTER WANTS SOMEONE TO FILM THE SAFARI BUT AT A PRICE SHOULD YOU DO IT? The short answer. Yes. But you’re not here for

Top 5 Tips for a Photographic Safari

For modern-day explorers such as yourself, wanting to come and delve into the splendor that is Africa on a photographic safari. Here are some tips

What Caliber is best for Africa?

Tons of choices, which caliber do I choose? So many times, our clients ask us what caliber to bring with on safari. This is a

Safari Words to Remember.     So you’ve booked your first South African safari, you may be excited, or scared or both. You don’t know what

Excerpt of a Safari Company Owner

As an American and a female, owning a safari company has its challenges along with great rewards. From dealing with the happenings in the bush